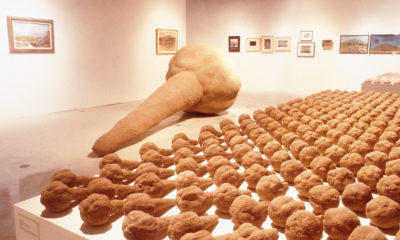 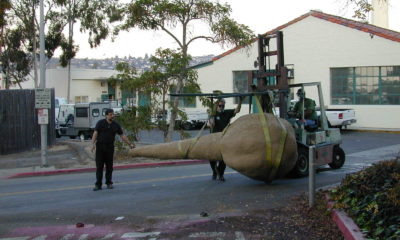 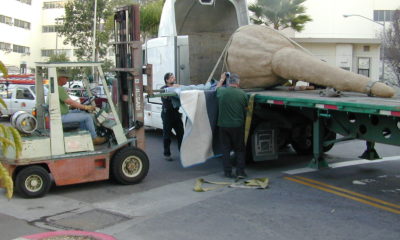 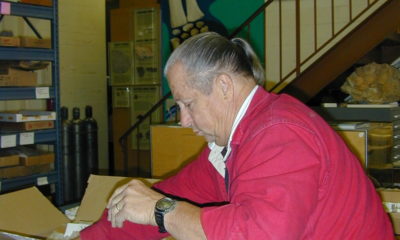 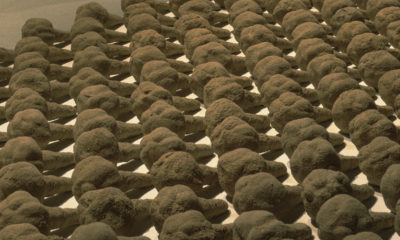 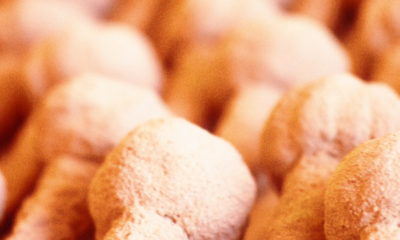 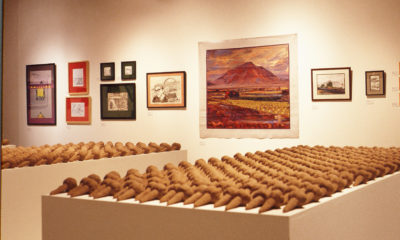 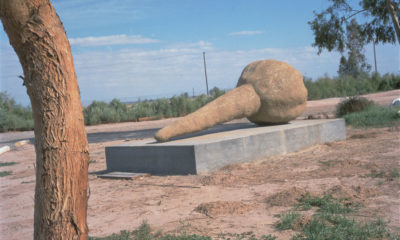 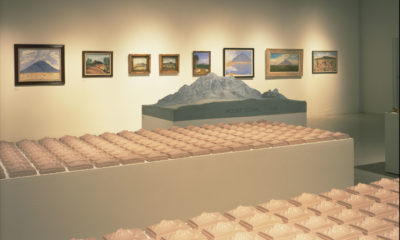 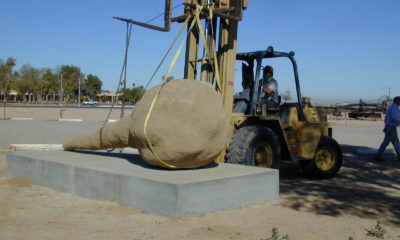 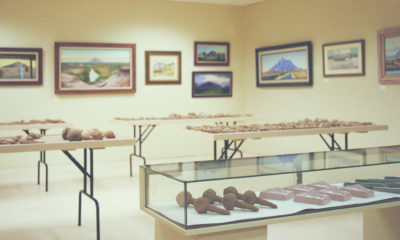 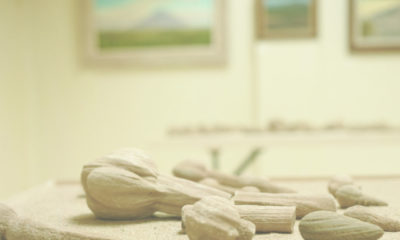 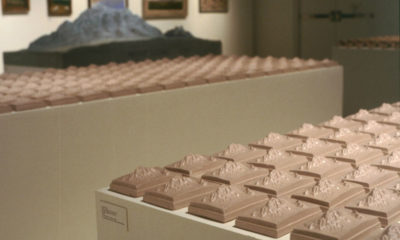 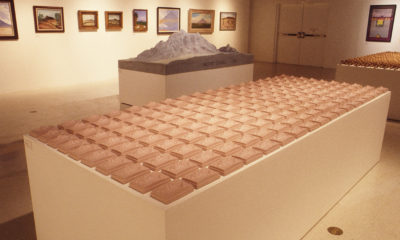 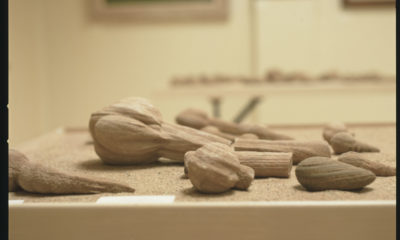 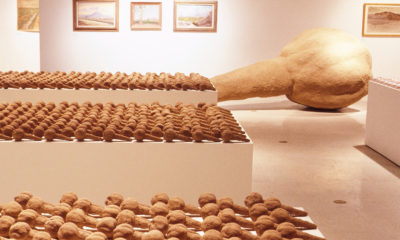 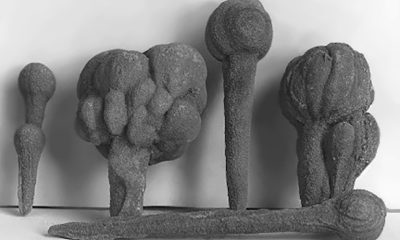 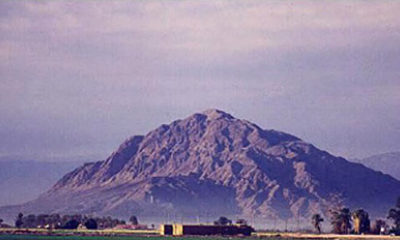 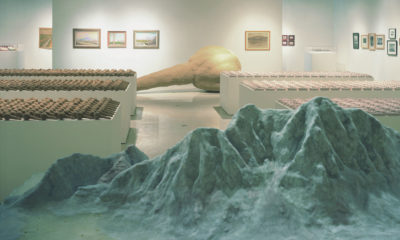 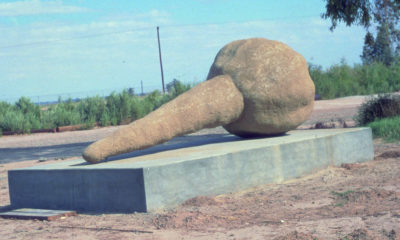 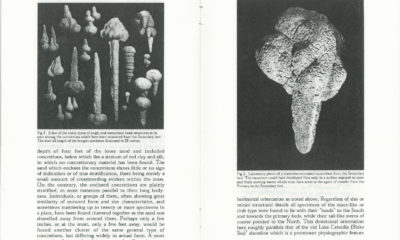 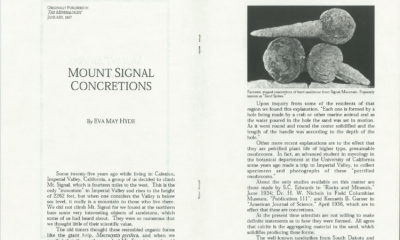 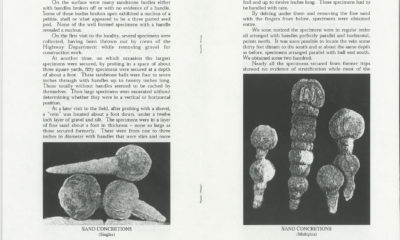 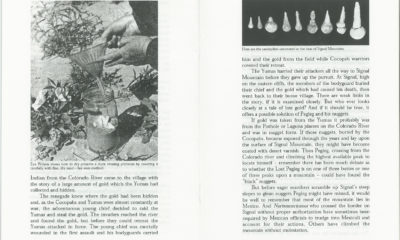 In his introduction to his 2000 project Signs of the Imperial Valley: Sand Spikes from Mount Signal, Allan McCollum begins with a deceptively simple query: “Where does the meaning come from?” It’s a question that has preoccupied, and animated, his artistic practice across the last half-century, and he goes on to immediately suggest a possible answer:

The metaphors McCollum is invoking here are strategically apt, as his Mount Signal project was based on an accretional geological phenomenon that, like the conditions that coalesce to produce the “meaning” of a given artifact, remains incompletely understood. The sand spikes—smallish stone conglomerations shaped something like a mace, bulbous on one end and tapering to a spike-like point at the other—first came to scientific attention in the early twentieth century. Concentrated in an area of the Sonoran Desert just north of the Mexican border and not far from Mount Signal, a 781-meter-high Mexican mountain known in Spanish as Cerro del Centinela and to the indigenous Kumeyaay people of the area as Weeishpa, the formations present several mineralogical puzzles.

First, it was determined that the objects, which ranged in size from a bit more than an inch to just over a foot in length, were solid sandstone, the grains of which were cemented together by calcite and, unlike McCollum’s metaphorical examples, contained no other apparent material (fossil or otherwise) around which the concretion had formed. Furthermore, when geologist William B. Sanborn first began a study of a bed containing the spikes in the 1930s, he reported that up to 95 percent of the specimens he uncovered were positioned so that their tails pointed toward the West. Conjecture about the origin of the artifacts ranged from fossilized sea plants to the petrified burrow structures of crustaceans; an explanation for their communal orientation was similarly elusive, with some speculating that they may have at some point been affected by an unidentified magnetic event. At one time relatively widespread in the area, the spikes were progressively destroyed during construction projects over the years and by 2000, when McCollum was commissioned to create a project for that year’s INSITE program—one of twenty-seven in the presentation, which was conceived for public sites in and around San Diego and Tijuana by Susan Buck-Morss, Sally Yard, Ivo Mesquita, and Osvaldo Sanchez—they had disappeared from the landscape altogether, becoming a part of the material-cultural memory of the area, a kind of phantasmal deep-time marker for place that preceded even the most longstanding of the area’s various present-day residents. Though its subject was prehistoric, in its shape and its content, the multivenue, multimedia Signs of the Imperial Valley: Sand Spikes from Mount Signal also sought to recognize these contemporary habitations, bringing together local artists to create a range of related works alongside McCollum’s and generating a welter of associated historical, scientific, and literary materials that taken together proposed the idea of a literal common ground shared by the various communities that inhabited that part of southern California.

In many ways, the sand spike project can be seen as the apotheosis of a series of works drawing on forms from nature that McCollum made across the decade of the 1990s. Beginning with The Dog From Pompei (1991) and Lost Objects (1991)—two series whose shapes were modeled on the famous “chained dog” cast, made from a naturally occurring mold where the animal’s body had lain that was uncovered in a nineteenth-century excavation of the destroyed city and a collection of fossilized dinosaur bones in the collection of Pittsburgh’s Carnegie Museum, respectively—McCollum began to turn his attention from the sculptural recapitulation of consumer and cultural objects to reiterations of the traces left by natural phenomena. With Signs of the Imperial Valley, the artist found an even more nuanced way to bridge the apparent distances between the two kinds of artifacts. If the project continued to track Benjaminian questions around reproduction and aura—and, in its profusion of replica spikes and mountain figurines, to consider the relationships between labor, repetition, and regularity that had been a part of McCollum’s program since the Plaster Surrogates and Individual Works series of the 1980s—Signs of the Imperial Valley also opened up newly onto questions about things and our ways of knowing them that go back centuries.

In their refusal to give up the secrets of their origins—to be fully known—the sand spikes elude the definitional aspirations of scientific classification. Instead, they reside in a kind of neither/nor space, one that’s as rich in artistic potential as it is scant in analytical certitude. Gone from the landscape, they can today only be seen in museum vitrines. But their uncertain natures, uncooperative as they are with geological inquiry, mark them less as standard mineralogical specimens than as what would have been known, in early modern times, as lusus naturae, or “jokes of nature.” For pre-Enlightenment natural philosophy, the lines between the naturally occurring and the man-made (like those between the magical and the rational) were far from clear, and marvelously hybrid things—stones and shells and pieces of wood that resembled handwrought objects—were the province of the Wunderkammer, or the cabinet of curiosity that was the forerunner of the modern museum. As Paula Findlen has observed, “Many Renaissance naturalists considered lusus naturae to be the key to an efficacious reading of the book of nature. … [A discussion of them] allows us to investigate aspects of pre-Linnaean taxonomy, in particular the need for alternative categories in classifying problematic phenomena, for lusus was frequently used as an anti-definition—a means of explaining something that would otherwise have been without explanation.”1 But this aesthetic charge did not flow only one way. Indeed, the extraordinary technical achievements of artisans, often in works that emulated natural forms, stood side by side in such collections of wonders with examples of playful nature. Across this period, “a common aesthetic of the marvels of art and nature merged,” writes Lorraine Daston, “one that exploited the ancient opposition of art and nature to evoke wonder. Because the opposition was still a conceptual reflex during the early modern period, its violation was startling. Bedrock assumptions quaked, and the intensity of the wonder was correspondingly seismic. These pleasing paradoxes, at once art and nature, aroused wonder most intensely by blurring the line between nature and human artisan.”2

Considered within this context, the various possible meanings of the sand spike, and of the position of the project made about it within McCollum’s oeuvre, begin to dilate and ramify. His reduplication of a bygone artifact, one around which his artistic attention has bonded layers of new significance, gives double substance to a doubly absent entity—formally resuscitating a thing now lost that was itself a record of a lost thing, and putting it in dialogue not just with its present-day context as a kind of figure with local significance to the Imperial Valley but also with a strand of intellectual history crucial to the development of the methodologies of display and presentation, and of the complex valences of the relationship between the natural and the artificial, that have long been central fascinations of the artist’s work. These varied connotations gather around the project like sand around a handful of vital seeds, and they build new traces at which later generations might similarly marvel.

1
Paula Findlen, “Jokes of Nature and Jokes of Knowledge: The Playfulness of Scientific Discourse in Early Modern Europe,” in Renaissance Quarterly, vol. 43, no. 2 (Summer 1990), p. 293. For an even fuller discussions of such phenomena and their reception in the pre-Enlightenment period, see Findlen, Possessing Nature: Museums, Collecting, and Scientific Culture in Early Modern Italy (Berkeley: University of California Press, 1994), and Lorraine Daston and Katharine Park, Wonders and the Order of Nature 1150–1750 (New York: Zone Books, 2001), which are only two of the many fine examples of scholarship on the topic.
2
Lorraine Daston, “Nature by Design,” in Picturing Science, Producing Art, ed. Caroline A. Jones and Peter Galison (New York: Routledge, 1998), p. 238.