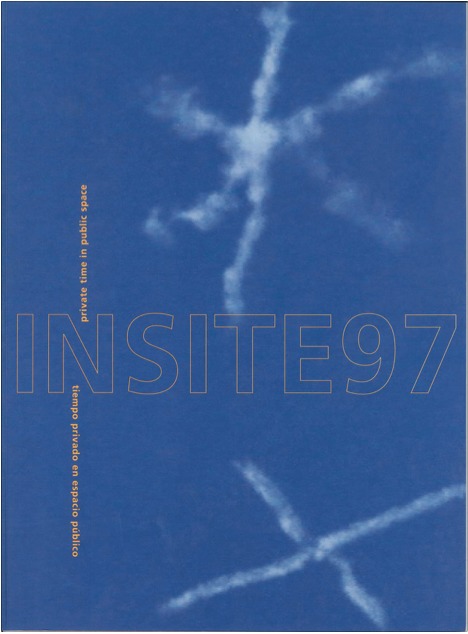 Following the lead of inSITE97, Private Time in Public Space is a book composed in two affiliated parts, each arranged so as to move from philosophical inquiry toward the investigation of pragmatic embodiment. The first section, centered on the exhibition of works commissioned for inSITE97, ponders the capacity of art to register in the real world. While Susan Buck-Morss probes art’s “stunning power” in relation to the limits of its effect in “What is Political Art,” Allan Sekula’s Dead Letter Office delineates the coordinates of economic clout, political muscle and cultural construct within which quotidian life unfolds across the hemispheric conjunction. In “De-urbanized Art, Border De-installations”, Nestor Garcia Canclini probes the fluctuating and unstable urban frontiers that scarcely can contain the fluid energies of transnational forces. “Private time in Public Space: A Dialogue” by the curatorial team for the exhibition mulls over the import of the forty-two projects’ forays into downtown districts and urban outskirts. Statements by the artists together with photographic documentation invoke the semblance of the impassioned force and disarming self-effacement and wit of the work.

The second section of the book, focused around the inSITE97 community engagement projects, considers the force with which art might activate self-awareness—articulating individual and collective experience. In “The Old People Speak of Sound: Personality, Empathy, Community,” George Lewis considers the process of listening, within African-American musical traditions of improvisation, as an encounter with history, memory, identity and personality—a model of the Formation and nurturance or community.” Rethinking the tensions of the region within the continuum of time, Miguel Rio Branco’s photo work Between the Eyes, the Desert conjures the primordial frame of desiccated land and generative ocean, side-by-side montages grids of the momentary: fragmented portraits and emblems of vernacular convention. Jose Manuel Valenzuela Arce’s ponders the anomie of a late twentieth-century urban existence in which the dematerialized messages of the media and beckoning allures of commercial campaigns are countered by assertions of identity—tattoos marking the body and inscriptions across urban walls. “Stories from down the block and around the corner” and the artists’ compelling accounts of their processes consider the import of the fifteen community engagement projects made in exorbitantly disparate neighborhoods.

Fugitive photographic images of high school seniors—solemn and expectant—appear at chance intervals throughout the pages of text. Developed unevenly, according to the vagaries of light available in sites throughout the exhibition, Liz Magor’s Blue Students inhabit the book as they did the duration of inSITE97—metaphoric markers of their worldly counterparts.