(Living with Water: Getting to Know the Valley of Mexico River Basin) 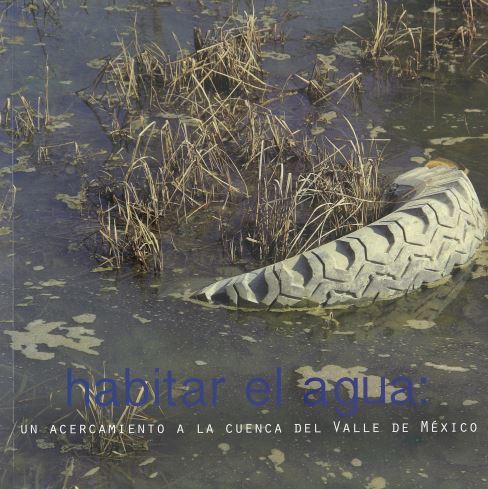 Habitar el agua: un acercamiento a la cuenca del Valle de México (Inhabit the Water: An Approach to the Basin of the Valley of Mexico) was conceived to encourage residents of Santa María La Ribera to assume an active role in the use and preservation of water. The book records the transformation of the lacustrine landscape of the Valley of Mexico, which was gradually drained as a result of urban development. Santa María La Ribera, for example, is named for its proximity to the Consulado River (ribera means riverside, shore) that was damned and diverted in the 1940s to build what is now Circuito Interior, a major Mexico City freeway.

Included in the book is an essay by Elías Cattan dedicated to the problematic of the human role in the use and preservation of water. It also offers a series of info-photographs about the topic taken while Cattan and Taller 13 were working on their research. The photographs help to explain the situation of the water resources in the city, the country, and the world. Also included is a photographic essay by Alex Dorfsman, offering a visual perspective about the different states of water in a wide range of contexts. The book is complemented by a series of useful tips for the responsible use and preservation of water.

This book was distributed to students, teachers, and to libraries at the schools in Santa Maria. It was also free for neighbors interested in environmental topics and in the basin of the Valley of Mexico. The publication accompanied an exhibit at the Museo de Geología, which was presented from November 2017 to March 2018.