(The Book of Pets) 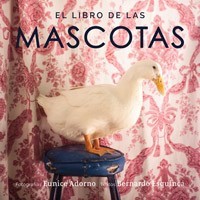 El libro de las mascotas (The Book of Pets), inSite/Casa Gallina’s first publishing project, is a collection of personal stories and images focused on the role of pets in the daily life of the neighborhood. To identify and contact pet owners in Santa María La Ribera, a campaign was launched through veterinary clinics, animal grooming businesses, and pet food and supplies stores, as well as social networks linked to organizations promoting responsible pet ownership. Writer Bernardo Esquinca and photographer Eunice Adorno (a resident of the neighborhood) were invited to collaborate on this project.

Interviews and photography for the publication began in January 2015. Esquinca and Adorno visited pet owners in their homes, and while Bernardo recorded the owners’ stories, Eunice photographed the pets in their environment. The recordings were later edited as written stories, illustrated with the photographs.

The book was co-published with Turner Publishing Company of Mexico and Spain.